THE RESISTIBLE RISE OF ARTURO UI

IN A TRANSLATION BY GEORGE TABORI REVISED BY ALISTAIR BEATON

OPENS AT THE DUCHESS THEATRE ON 25 SEPTEMBER 2013

WITH PREVIEWS FROM 18 SEPTEMBER

Chicago in the 1930s, the Great Depression – a time of unemployment, fear and corruption and the perfect time for a small-fry crime boss and his henchmen to make it big, to seize a greater power, an absolute power. Arturo Ui and his mob of gangsters run protection rackets for both workers and businesses. Soon Ui’s menacing shadow looms large, from the markets, to the docks and across the city itself.

Brecht’s work includes The Threepenny Opera (with Kurt Weill), The Life of Galileo, Mother Courage and Her Children, The Good Person of Szechuan and The Caucasian Chalk Circle.

Prior to its West End run, The Resistible Rise of Arturo Ui will return to the Minerva Theatre, Chichester for a limited engagement from 15 August to 14 September.

Henry Goodman plays Arturo Ui. He recently starred in The Old Vic’s production of The Winslow Boy. His other numerous theatre credits include Yes, Prime Minister (Chichester Festival Theatre and West End), Copenhagen (Lyceum Theatre Sheffield), Fiddler on the Roof (Sheffield Crucible and West End), The Hypochondriac (Almeida), Chicago (Adelphi), Art, Hysteria (Royal Court, West End and on tour) and Assassins (Donmar). Work at the RSC includes the title role in Richard III, The Comedy of Errors and Henry VIII. His credits for the National Theatre include Shylock in The Merchant of Venice, and Guys and Dolls. Goodman’s television credits include Yes, Prime Minister (Gold) and he will soon be seen in the forthcoming dramas Falcón (Sky Atlantic HD) and Final Flight (BBC2). Films include Wonder, Taking Woodstock, The Damned United, Keen Eddie, Colour Me Kubrick, Green Street, Out on a Limb, Churchill – The Hollywood Years, Notting Hill and Mary Reilly. He has won and been nominated for Olivier, Evening Standard, TMA and Critics’ Circle Awards for his roles in Duet for One, Fiddler on the Roof, Chicago, Hysteria, Assassins, Groucho at Large, Peter Pan, Metamorphosis, Every Man in His Humour, The Devils, The Comedy of Errors, Volpone, The Time of Your Life, The Merchant of Venice and Angels in America.

Keith Baxter plays the Actor. He has previously appeared at Chichester in Elvira ’40, The Inconstant Couple, A Woman of No Importance, Tonight We Improvise, Antony and Cleopatra and The Country Wife. He also directed After October, Dangerous Corner and Rope at Chichester (the latter two productions both transferred to the West End). Baxter’s numerous credits also include the stage and screen productions of Chimes at Midnight, directed by Orson Welles.

Michael Feast plays Roma. He has previously appeared at Chichester in A Month in the Country, Macbeth (also West End, BAM and Broadway), Twelfth Night, The Master and Margarita, Faustus, Nathan the Wise, The Seagull, A Christmas Carol and Vivat! Vivat Regina! Other theatre credits include The King’s Speech (UK tour and West End), The Forest, The Tempest, No Man’s Land and American Buffalo (National Theatre), Faust I & II (RSC Stratford), Murder in the Cathedral, Measure for Measure (RSC Stratford and London) and Ourselves Alone (Royal Court and Dublin).

William Gaunt plays Old Dogsborough. He has previously appeared at Chichester in The Cherry Orchard. Other theatre credits include Sixty Six Books – Concerning Faith (Bush Theatre), Henry IV Parts I & II (Shakespeare’s Globe), King Lear and The Seagull (RSC), Humble Boy, Albert Speer, The Cherry Orchard, Look Back in Anger, The Mysteries and An Inspector Calls (National Theatre), and West End productions of The Miracle Worker, Travels With My Aunt, Boys in the Band and Flip Side.

Joe McGann plays Giri/O’Casey. He has previously appeared at Chichester in The Water Babies. Other theatre credits include Of Mice and Men (Nottingham Playhouse and West End), the West End production of Oliver! directed by Sam Mendes, and national tours of Cat on a Hot Tin Roof and Guys and Dolls.

Jonathan Church is Chichester Festival Theatre’s Artistic Director. His credits for Chichester include Singin’ in the Rain, which transferred to the West End in 2012 and begins a nationwide tour later this year, having received Olivier and Evening Standard Award nominations and a Whatsonstage.com Award for Best Choreographer. His Chichester credits also include The Critic and The Real Inspector Hound, The Grapes of Wrath, Pravda, Hobson’s Choice, The Circle and The Life and Adventures of Nicholas Nickleby. Other credits include the Olivier Award-nominated Of Mice and Men. 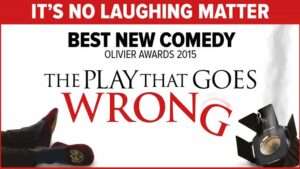 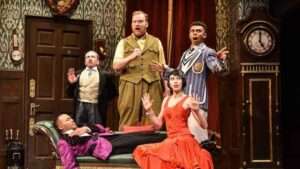 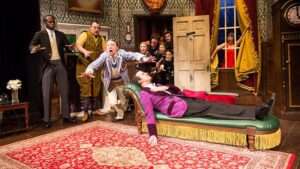