Director Ian Rickson reunites with the writer Jez Butterworth following Mojo’s original premiere at the Royal Court in 1995, and their recent success with Jerusalem.

Butterworth wrote and directed the film adaptation of Mojo in 1997, which featured the late writer, director and actor Harold Pinter.

Mojo won the Olivier award for Best New Comedy and is a savagely funny play set against the fledgling rock ‘n’ roll scene of 50’s Soho, delving into the sleazy underworld and power games of London’s most infamous district. 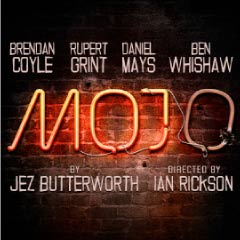