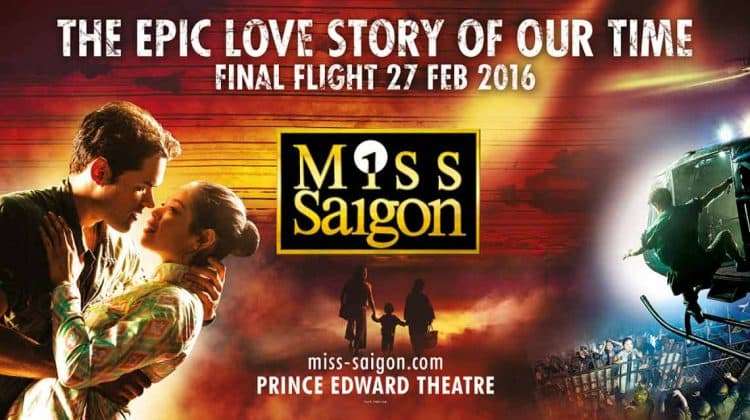 From the writers of Les Miserables, this blockbuster show is now playing at the Prince Edward Theatre, in a brand new production re-imagined by Laurence Connor.

Miss Saigon is an epic musical set against the war in Vietnam; a passionate, powerful and tragic love story full of raw emotion, huge theatrical set pieces and extraordinary music.

Composers of the show, Claude-Michel Schönberg and Alain Boublil, who wrote Les Miserables, have written a brand new song called ‘Maybe’ for the role of Ellen in this new production.

Miss Saigon has music by Claude-Michel Schönberg with lyrics by Richard Maltby Jnr and Alain Boublil, adapted from original French lyrics by Alain Boublil. This new production will be directed by Laurence Connor with Musical Staging by Bob Avian and additional Choreography by Geoffrey Garratt, Production Design by Totie Driver and Matt Kinley from an original concept by Adrian Vaux, Costume Design by Andreane Neofitou, Orchestrations by William David Brohn, Lighting Design by Bruno Poet and Sound Design by Mick Potter.

It has been 25 years since the show first premiered in London at the Theatre Royal Drury Lane directed by Nicholas Hytner, where it played for 10 record-breaking years.

Miss Saigon will complete its West End run on 27 February 2016 at the Prince Edward Theatre.

Set in 1975 during the final days of the American occupation of Saigon in Vietnam, Miss Saigon is an epic love story inspired by the opera Madame Butterfly about the relationship between an American GI and a young Vietnamese woman.

Why book Miss Saigon tickets with us?