Actor Ashley Zhangazha has won first prize in this year's Ian Charleson Awards, for his performance as Ross in Macbeth at the Crucible, Sheffield.

Actor Ashley Zhangazha has won first prize in this year’s Ian Charleson Awards, for his performance as Ross in Macbeth at the Crucible, Sheffield. 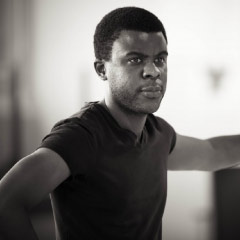 Ashley Zhangazha in rehearsals for Macbeth

Ashley Zhangazha, who trained at Guildhall, was said to be “thrilled” to have won the award. Ashley is currently appearing alongside Lenny Henry in Fences at the Duchess Theatre.

Directed by Daniel Evans, the Crucible production of Macbeth ran from September to October last year. Ashley Zhangazha was also nominated for the 2010 awards for his performance in King Lear at the Donmar Warehouse.

The Second Prize at this year’s awards went to Amy Morgan for her role as Margery Pinchwife in The Country Wife at the Royal Exchange, Manchester, the Third Prize to Lara Rossi as Dol Common in The Alchemist at the Liverpool Playhouse, and the Special Commendation went to Vanessa Kirby in the role of Masha in Three Sisters at the Young Vic.

The annual awards were established in 1991  in memory of the actor Ian Charleson who died in 1990 from AIDS.