Skip to content
Duke of York's Theatre, London
Booking to 26 October 2013
Sorry, this show is not currently booking.

Hattie Morahan stars as Nora in a West End transfer of the Young Vic’s acclaimed production of Ibsen’s classic A Doll’s House.

Directed by Carrie Cracknell, the critically acclaimed Young Vic production of A Doll’s House is running at the Duke of York’s Theatre for a limited 12 week run (8 August to 26 October 2013).

WHO’S IN IT? A DOLL’S HOUSE CAST

★ ★ ★ ★ ★
‘If you ever see a production of the play, see this one… Hattie Morahan’s Nora is a once-in-a-lifetime performance.’
The Sunday Telegraph

★ ★ ★ ★
‘There is so much to admire in this marvellous production… terrific.’
The Times

‘A bravura performance that elevates Morahan to the front rank of British actors.’
The Guardian 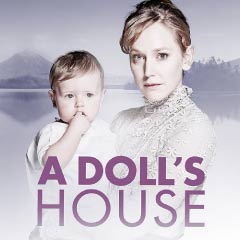 News about A Doll's House
More >

CASTING UPDATE FOR WEST END TRANSFER OF YOUNG VIC’S TWO TIME SELL-OUT A DOLL’S HOUSE
Carrie Cracknell’s critically acclaimed Young Vic production of A Doll’s House will transfer to the West End for a strictly limited 12 week run beginning 8 August 2013. Olivier award-winning playwright Simon Stephens’ new version of Henrik Ibsen’s A Doll’s House is booking at the Duke of York’s Theatre to 26 October 2013, with press night on 14 August at 7pm. Joining Hattie Morahan reprising her award-winning role of Nora Helmer are Dominic Rowan as Torvald, Nick Fletcher as Nils Krogstad, Steve Toussaint as Doctor Rank, Caroline Martin as Kristine Linde, Leda Hodgson as Anna and Yolanda Kettle as Helene. The role of young Jon will be alternated by Shane Lyons-Cording, Lukas Rolfe and Jake Tuesley and the role of Ivar will be played by Leon Rolfe, Tommy Rodger and Harry Polden. The Helmers’ baby will be played by Julia Eliott Lockhart, Cary Elwood and Joseph Neville. Ibsen was a pathbreaking and fearless analyst of human relationships and A Doll's House is always a thrilling moral explosion - as much so today as when it was first seen over 130 years ago. The controversy that erupted around it has never died down: is it an attack on marriage? Is it proto-feminist? Is its defence of the individual compatible with social order? And if it is not, then how are people to live? In keeping with Young Vic pricing, at each performance of A Doll’s House in the West End there will be over 100 tickets available at £10.00 each and throughout the run, there will be over 15,000 top price tickets available at £32.50 if booked before 8 August 2013. Praised by audiences and critics alike, Cracknell’s production of A Doll’s House premiered at the Young Vic in July 2012. The production returned in March this year when it celebrated a second sell-out run. Set designs are by Ian MacNeil with costumes by Gabrielle Dalton, lighting by Guy Hoare, music by Stuart Earl, sound by David McSeveney and choreography by Quinny Sacks. The literal translation is by Charlotte Barslund. Hattie Morahan won the 2012 Evening Standard Award and Critics’ Circle Award for her performance as Nora. She was also Olivier award nominated for the role. Morahan has worked extensively on stage where her other recent theatre credits include The Dark Earth And The Night Sky for the Almeida, The Real Thing for the Old Vic, The City at the Royal Court, Three More Sleepless Nights for the National Theatre, The Family Reunion for the Donmar Warehouse and Sixty-Six Books at the Bush. She played Elinor in the BBC adaptation of Sense and Sensibility and has a regular role in Outnumbered. Dominic Rowan plays leading character Jake Thorne in ITV’s crime drama series Law & Order UK which begins a new series this weekend. His past work in theatre includes After Dido for the Young Vic and English National Opera, The Village Bike for the Royal Court, Henry VIII for the Globe, The Misanthrope at the Comedy Theatre and Berenice for the Donmar Warehouse. The Young Vic, Mark Rubinstein, Gavin Kalin and Neil Laidlaw present the Young Vic production of A Doll’s House in the West End. The production is supported by the Esmée Fairbairn Foundation through its social investment fund. LINKS Book tickets to A DOLL'S HOUSE