Roddy Doyle’s best-selling novel The Commitments - which was turned into a BAFTA Award-winning movie - is now a new musical at the Palace Theatre in London's West End. 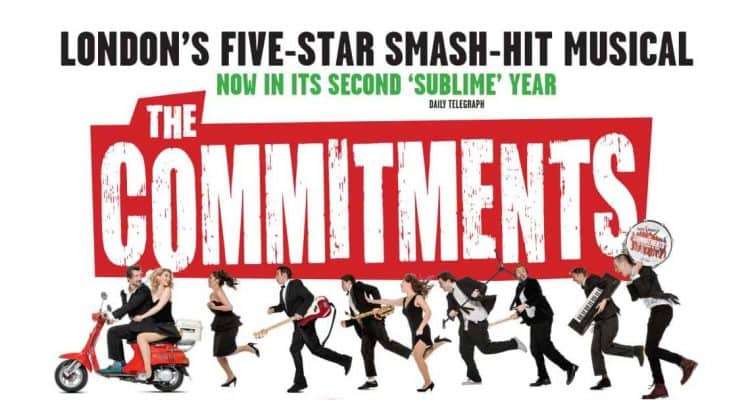 Roddy Doyle’s best-selling novel The Commitments – which was turned into a BAFTA Award-winning movie – is now a new musical at the Palace Theatre in London’s West End.

Adapted by Roddy Doyle himself and directed by award winning Jamie Lloyd, The Commitments tells the story of Jimmy Rabbitte, a young working class music fan who shapes an unlikely bunch of amateur musicians and friends into an amazing live act, the finest soul band Dublin has ever produced.

This fabulous show is packed with over 20 great soul classics including Night Train, Try A Little Tenderness, River Deep, Mountain High, In The Midnight Hour, Papa Was A Rolling Stone, Save Me, Mustang Sally, I Heard It Through The Grapevine, Thin Line Between Love and Hate, Reach Out, Uptight, Knock On Wood, I Can’t Turn You Loose AND MANY MORE.

Hilariously funny, and packed full of classic soul songs, The Commitments is a riotous night at the theatre.

The Commitments will finish its run at the Palace theatre on 1 November 2015.

★★★★★ “THE MUSICAL WE’VE BEEN WAITING FOR. A SWEET-SOUL, SOLID-GOLD, FIVE-STAR BLAST – SO GOOD I ALMOST WEPT.” Sunday Times

★★★★ “UNSTOPPABLE FUN. A BIG-HEARTED, BIG-NIGHT OUT” The Times

Why book The Commitments tickets with us?