Following his triumphant performance as Othello in the West End, Lenny Henry takes on the lead role of Troy Maxson in August Wilson’s compelling drama about black American family life.

Lenny Henry delivers a blistering performance that has won him wide critical acclaim playing Troy Maxson, the once gifted athlete who was denied his shot at the big time.

Set between the Korean and Vietnam wars, Fences is a powerful account of a family trying to hold itself together and of what happens when a strong man is robbed of his dreams.

**** “[Lenny Henry] holds the stage as Troy Maxson” The Guardian

**** “[Lenny Henry] is, and I don’t use the word lightly, magnificent in a drama that often seems like the black American equivalent of Arthur Miller’s Death of a Salesman.” The Telegraph 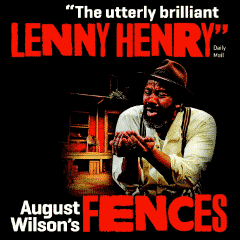 Ashley Zhangazha wins Ian Charleson Award 2012
Actor Ashley Zhangazha has won first prize in this year's Ian Charleson Awards, for his performance as Ross in Macbeth at the Crucible, Sheffield. [caption id="" align="alignright" width="240"] Ashley Zhangazha in rehearsals for Macbeth[/caption] Ashley Zhangazha, who trained at Guildhall, was said to be "thrilled" to have won the award. Ashley is currently appearing alongside Lenny Henry in Fences at the Duchess Theatre. Directed by Daniel Evans, the Crucible production of Macbeth ran from September to October last year. Ashley Zhangazha was also nominated for the 2010 awards for his performance in King Lear at the Donmar Warehouse. The Second Prize at this year's awards went to Amy Morgan for her role as Margery Pinchwife in The Country Wife at the Royal Exchange, Manchester, the Third Prize to Lara Rossi as Dol Common in The Alchemist at the Liverpool Playhouse, and the Special Commendation went to Vanessa Kirby in the role of Masha in Three Sisters at the Young Vic. The awards were announced at a lunch ceremony at the National Theatre on 24 May 2013. Run jointly by the National Theatre and the Sunday Times, the Ian Charleson Awards celebrate the best UK performances by actors under 30 in a classical role. The annual awards were established in 1991  in memory of the actor Ian Charleson who died in 1990 from AIDS. This year's jury consisted of Michael Grandage, Geraldine James, John Peter and Wendy Spon. LINKS Ian Charleson Awards Ashley Zhangazha's agent