Acclaimed illusionist Derren Brown heads back to London with brand new live show INFAMOUS. The master of psychological illusion promises to once again shock and entertain in his new show at the Palace Theatre in London.

The show is the first time that Derren Brown has performed at the Palace Theatre since his debut West End production Derren Brown Live in 2004.

INFAMOUS is written by Brown and award-winning actor and magician Andy Nyman, who will also direct the show, which runs at the Palace Theatre from 24 June to 17 August 2013.

Brown has said that the show is a secret, but that it is a psychological roller-coaster based around audience participation and promises to be very different from previous shows – something you can’t find anywhere else in theatre or entertainment. 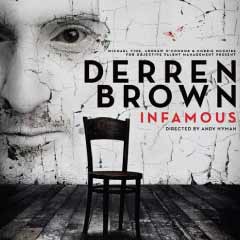