From Here To Eternity

The world premiere of Tim Rice's epic new musical From Here To Eternity comes to the Shaftesbury Theatre, adapted from the classic novel by James Jones and the Oscar-winning movie starring Burt Lancaster and Deborah Kerr.

ABOUT From Here To Eternity

The world premiere of Tim Rice’s epic new musical From Here To Eternity is now playing at the Shaftesbury Theatre in London, adapted from the classic novel by James Jones and the Oscar-winning movie starring Burt Lancaster and Deborah Kerr.

This gripping tale of illicit love and army life is a breathtaking and romantic show set against the backdrop of Pearl Harbor in 1941.

The musical unites the writing talents of Tim Rice (lyrics), Stuart Brayson (music) and Bill Oakes (book), and is directed by Tamara Harvey, designed by Soutra Gilmour and choreographed by Javier De Frutos.

Even on an army base, love and desire are never very far away as the troubled Private Prewitt falls for the kind-hearted escort club girl Lorene. When his platoon sergeant, Warden, embarks on a dangerous affair with his commanding officer’s wife, Karen, the lives of both men are set on a course they cannot control. As war approaches, the worlds of the four lovers and the soldiers of G Company are dramatically ripped apart ever. 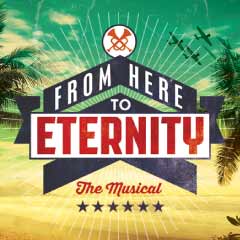 Why book From Here To Eternity tickets with us?

Aida at the London Coliseum