In the publicly voted Audience Award, the shows now vying for the award are Billy Elliot The Musical, Matilda The Musical, The Phantom Of The Opera and Wicked.

The National Theatre’s production of The Curious Incident Of The Dog In The Night-Time leads the list with eight nominations, followed by new musical Top Hat with seven, and the West End transfer of Chichester Festival Theatre’s revival of Sweeney Todd with six. Other stand-out nominations include The Audience starring Helen Mirren and the recent Chichester and Old Vic revival of Kiss Me, Kate each receiving five nominations, and Constellations, The Bodyguard and Twelfth Night with four.

A wealth of star names have been given the nod for awards this year including Helen Mirren and Richard McCabe in The Audience, Heather Headley and Debbie Kurup in The Bodyguard, Leigh Zimmerman in A Chorus Line, Luke Treadaway in The Curious Incident Of The Dog In The Night-Time, Rupert Everett in The Judas Kiss, James McAvoy in Macbeth and Kristen Scott Thomas in Old Times.

Voting for the BBC Radio 2 Audience Award is well underway, with 65,000 votes already recorded, and the shortlist now announced as Billy Elliot The Musical, Matilda The Musical, The Phantom Of The Opera and Wicked.

New writing is at the forefront of this year’s nominations, leading the way across many categories from The Effect, Constellations and This House to Cinderella (at St James’s Theatre) and Goodnight Mr Tom.

Dance nominations are split between The Royal Ballet and Sadler’s Wells, with notable opera nominations including three out of four nominations for English National Opera for Best New Opera Production, and The Stage Management Teams at ENO London Coliseum and the Royal Opera House nominated for Outstanding Achievement in Opera.

As previously announced, former Olivier Award winners Gillian Lynne CBE and Michael Frayn are to be honoured with Special Awards for their outstanding contributions to theatre.

The Olivier Awards will take place at the Royal Opera House on Sunday 28 April, hosted by Hugh Bonneville and Sheridan Smith. The ceremony will be broadcast live on BBC Radio 2 from 6.30pm and exclusive red carpet interviews with the stars as they arrive before the big night. A full television highlights package will also be broadcast on ITV later in the evening. 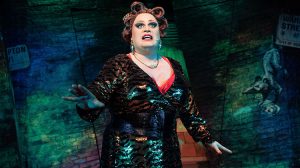