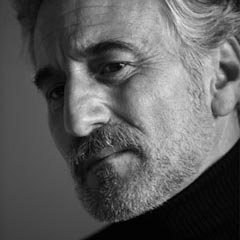 Theatre roles include: Degas in The Line, Dr Feldman in Duet for One, Tevye in Fiddler on the Roof, Duke of Plaza Torro in The Gondoliers, Eddie in Feelgood, Argan in The Hypochondriac, The Birthday Party, Billy Flynn in Chicago, Marc in Art, Buddy Fiddler in City of Angels, Freud in Hysteria, Guiteau in Assassins, Buddy in Follies. Also extensive credits at the RSC (including the  title role in Richard III), Chichester (most recently Sir Humphrey in Yes, Prime Minister) and the National (including Shylock in The Merchant of Venice, Nathan Detroit in Guys and Dolls, Roy Cohn in Angels in America and David Rosenberg in The Holy Rosenbergs).

On Broadway his roles have included Serge in Art, Max Bialystock in The Producers and Tartuffe in Tartuffe.

TV credits include Yes Minister, Nixon’s The One, The Turing Project, Florizel Street, Lehman Brothers – Something for Nothing, Murder in Suburbia, The Mayor of Casterbridge, Foyle’s War, The Merchant of Venice, Secret Weapon, Hamilton Mattress, Murder Rooms, Dalziel and Pascoe, Dirty Tricks, The Arabian Nights, Unfinished Business, Cold Lazarus, Broken Glass, Christmas, Measure for Measure, Degas and Pissarro Fall Out, 99-1, Lovejoy, Spinoza, Maigret, The Gravy Train, Gentlemen and Players, London’s Burning, This is David Lander, Bust, After the War and The Chain.

Films include Taking Woodstock, The Damned United, Keen Eddie, Colour Me Kubrick, Green Street, Out on a Limb, Churchill – The Hollywood Years, The Life and Death of Peter Sellers, The Final Curtain, The Labyrinth, Notting Hill, Private Parts, The Saint, Mary Reilly, Queen of Hearts, Son of the Pink Panther.