The smash-hit Broadway musical Rock of Ages continues to rock London with its 80’s tunes. Now at the Garrick Theatre.

The legendary show described as a ‘Great Experience’ by Alice Cooper, ROCK OF AGES is the worldwide smash-hit that features a potent mix of 80′s-themed hilarity and eyebrow scorching tunes, including Don’t Stop Believin’, We Built This City, The Final Countdown, Wanted Dead or Alive, Here I Go Again, Can’t Fight This Feeling and I Want To Know What Love Is.

The five-time Tony nominated musical is London’s most raucous and funny show. 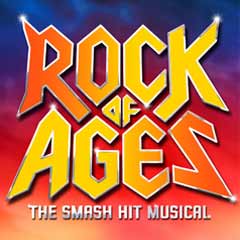 Age Restrictions: Recommended for ages 14 and over. Parental supervision advised.Contains overt references to sex and adult themes. Contains strobe lighting.

News about Rock of Ages
More >

Rock of Ages to close in the West End
Producers of 80's rock musical Rock of Ages have announced that the show is to close. [caption id="" align="alignright" width="240"] Rock of Ages to close in the West End[/caption] Currently playing at the Garrick Theatre in London's West End, Rock of Ages will complete it's run on 2 November 2013 before going on a tour of the UK. A hit on Broadway, and turned into a 2012 movie starring Tom Cruise, the London production originally opened at the Shaftesbury Theatre in September 2011 before moving to the Garrick Theatre in January this year. The jukebox show features a list of classic 1980's hits by Bon Jovi, Whitesnake, Poison, Europe, Twisted Sister and more. The UK show originally starred Shayne Ward and Justin Lee Collins; the current cast includes former Mike and the Mechanics vocalist Tim Howar and Daniel Fletcher. LINKS SPECIAL OFFER: Save on tickets to Rock of Ages at the Garrick Theatre in London