Tommy Steele returns to London as Scrooge The Musical at the London Palladium. 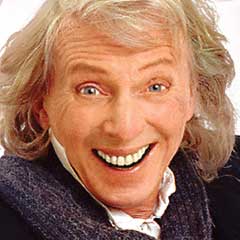 It’s hard to think of anything more christmasy than the idea of Tommy Steele coming back to the London Palladium over the holidays to play Scrooge in the musical version of Dickens’ classic A Christmas Carol.

Tommy Steele recreates the role of Ebenezer Scrooge in Leslie Bricusse’s musical extravaganza, playing at the Palladium until 5 January 2013.

With more than 20 hit singles to his name, a Hollywood career that has included classics such as The Happiest Millionaire and Finian’s Rainbow, and a bewildering number of award-winning stage musicals, Tommy Steele remains one of the all-time greats of British entertainment.

His stage career alone includes starring roles in musicals such as Half a Sixpence, Hans Christian Andersen, Singing in the Rain and Some Like It Hot.

Tommy – it’s great to see you back at the Palladium.

Book tickets to Scrooge at the London Palladium in London