The cast of this new London production includes Scarlett Strallen as Cassie, Victoria Hamilton-Barritt as Diana, John Partridge as Zach and Leigh Zimmerman as Sheila.

The West End revival of A Chorus Line is directed and choreographed by Bob Avian, who co-choreographed the original production alongside Michael Bennett. Avian also directed the 2006 New York revival of the show.
The show’s music is by Marvin Hamlisch with lyrics by Edward Kleban, and a book by James Kirkwood, Jr. and Nicholas Dante.

In A Chorus Line, auditions are underway for a new Broadway musical. For everyone present, it’s the chance of a lifetime. It’s the one opportunity to do what they’ve always dreamed of – to have the chance to dance. Told through captivating song, riveting drama and stunning choreography, the auditionees describe the events that have shaped their lives and their decisions to become dancers.

The show features classic songs including One Singular Sensation and Hope I Get It, and the original 1975 Broadway production won 9 Tony Awards and the 1976 Pulitzer Prize for Drama. 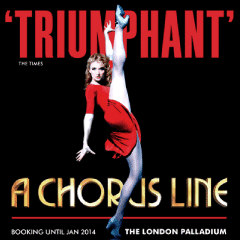