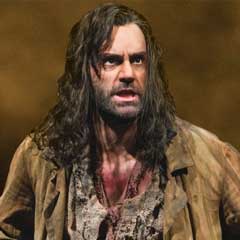 Ramin Karimloo in Les Miserables, on the shortlist for a 2012 Olivier Audience Award

The  West End shows Billy Elliot The Musical, Jersey Boys, Les Misérables and Wicked have been voted into the shortlist by members of the public, and were announced today on BBC Radio 2’s Elaine Paige on Sunday show.

Voting now continues to choose a winner, which will be announced at the Olivier Awards on 15 April at the Royal Opera House, in a ceremony hosted by Michael Ball and Imelda Staunton. Voting will stay open until 5pm on 11 April.

Shows that were on the Audience Award longlist but missed out in the voting include Mamma Mia!, War Horse and The Mousetrap.

Billy Elliot The Musical has been playing at the Victoria Palace theatre since 2005, with music by Elton John. Jersey Boys, a hit on Broadway, tells the story of American band Frankie Valli and the Four Seasons and plays at the Prince Edward Theatre. Les Misérables, which is the world’s longest running musical having opened in 1985, and is currently playing at the Queen’s Theatre starring Ramin Karimloo. Finally, Wicked, which won the Audience Award in 2010, has been playing at the Apollo Victoria since 2006.

The full Olivier Award nominations will be announced on 15 March.