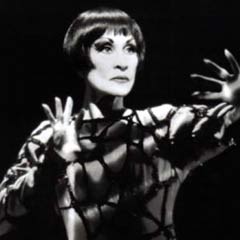 Chita Rivera, star of Kander & Ebb's Kiss of the Spider Woman, one of the stars to have appeared at the gala. Photo: Catherine Ashmore

A major charity gala which was to have been held in London on 29 April 2012 to celebrate the work of legendary songwriters Kander & Ebb has been cancelled.

The all-star gala at the Victoria Palace Theatre wass being produced by veteran promoter and producer Barry Mishon in collaboration with John Kander, and was to have aided the Ovarian Cancer Action charity.

The charity today announced that it had decided to withdraw from the show, ” for no other reason than due to the current economic climate in which we are operating”, and that they were, “unable to afford to proceed with this venture. Had we been able to continue, we had complete confidence that it would have been a great success, but the environment necessitates that the focus and spend of the Charity must be solely on its core charitable activities at the current time. We reiterate our extreme disappointment at having to arrive at this conclusion, and thank everyone sincerely, particularly Barry, for the time, effort, enthusiasm and determination which has gone into this to date.”

Barry Mishon, the producer of the show, thanked everyone for their  “great support” but said that he was “dismayed and very upset” on hearing the news.

John Kander and Fred Ebb are two of the most successful musical theatre songwriting partnerships of all time, with their work including Cabaret, Chicago, Zorba, The Rink and Kiss of the Spider Woman. Fred Ebb passed away in 2004.

Blues In The Night