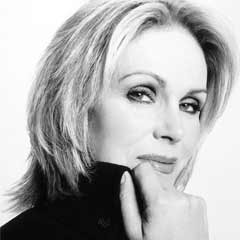 And he has brought in the big-guns for this production including Robert Lindsay as Henry II and Joanna Lumley as Eleanor of Aquitane.

Her previous TV appearances include Purdy in The New Avengers as well as major roles in Sapphire and Steel, Jam and Jerusalem and Sensitive Skin.

Following a run in the West End, Lumley recently made her Broadway debut in La Bête alongside Mark Rylance and David Hyde Pierce.

Author of several best-selling books and a human rights and animal welfare activist, Lumley headed a successful campaign in recognition of the Gurkhas. Lumley was awarded an OBE in 1995.

Joining Joanna Lumley in The Lion in Winter is Robert Lindsay as Henry II, Joanna Lumley as Eleanor of Aquitane, Sonya Cassidy as Alais, Joseph Drake as John, Rory Fleck-Byrne as Philip and James Norton as Geoffrey.