Crazy For You at the Novello Theatre – Save £30 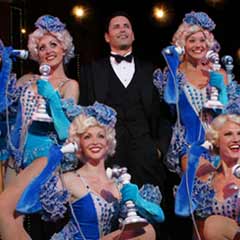 Crazy For You at the Novello Theatre

Dazzling choreography and fabulous Gershwin tunes abound in this high-energy new revival of classic musical CRAZY FOR YOU, transferring from the Open Air Theatre to the Novello in the West End.

Packed full of George and Ira Gershwin’s classic songs including ‘I Got Rhythm’, ‘Someone To Watch Over Me’, ‘Embraceable You’ and ‘Nice Work If You Can Get It’, CRAZY FOR YOU boasts not only some of the finest songs ever written but some of the most dynamic choreography ever seen on the London stage.

CRAZY FOR YOU reunites director Timothy Sheader and choreographer Stephen Mear, who were responsible for the multi-award winning production of Hello, Dolly!. The entire company of the Regent’s Park production will star in the West End run, led by theatre veterans Harriet Thorpe and David Burt, and introducing to the British stage the highly respected Broadway performer, Sean Palmer as Bobby Child, alongside Clare Foster as Polly Baker, Kim Medcalf as Irene Roth and Michael McKell as Lank.

Following a hugely successful run at the Open Air Theatre in Regent’s Park, where the show enjoyed packed audiences and a wave of five star reviews, the show is coming into the West End for a limited run – and westendtheatre.com readers can enjoy £27.50 off tickets.