As Michael Grandage ends his 10 year stewardship as artistic director of the Donmar Warehouse, he's certainly going out with a bang. In a final season that includes some big names, including Jude Law, Ruth Wilson, Douglas Hodge, Karen Gillan and Eddie Redmayne, it's Law and Wilson up first in a new production of Eugene O'Neill's Anna Christie (until 8 October 2011).

As Michael Grandage ends his 10 year stewardship as artistic director of the Donmar Warehouse, he’s certainly going out with a bang. 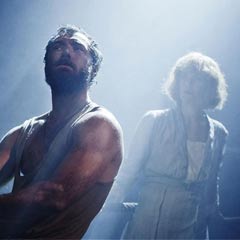 In a final season that includes some big names, including Jude Law, Ruth Wilson, Douglas Hodge, Karen Gillan and Eddie Redmayne, it’s Law and Wilson up first in a new production of Eugene O’Neill’s Anna Christie (until 8 October 2011).

Eugene O’Neill’s epic, Pulitzer prize winning play is directed by Donmar associate Rob Ashford, fresh from directing Shrek The Musical at the Theatre Royal Drury Lane, and with design is by Paul Wills, whose Donmar productions include The Man Who Had All The Luck and Novecento.

So what did the critics think? See our round-up of reviews, below.

“Jude Law is the big draw in this outstanding revival of Eugene O’Neill’s 1921 play. But Law’s is only one in a triptych of fine performances, the others coming from Ruth Wilson and David Hayman, in a production by Rob Ashford that discovers the inner intensity of a play that can easily lapse into coarse melodrama.”

“Ashford’s staging brings alive both a rough sailors’ bar and life aboard the barge, with an evocative planked design by Paul Wills and a stage that tilts to represent the boat at sea. The shipwreck rescue is thrillingly staged and there are haunting sea shanties and great swirls of fog in the night.”

“Suffused literally and symbolically by the sea and compromised by a calculatedly unpersuasive “happy” ending, it’s a piece that, in this beautifully acted version, retains an undimmed capacity to shock because of the emotional daring of the twist it gives to the tear-stained convention of the reformed tart with a heart.”

“The play itself isn’t a masterpiece. O’Neill’s language is overburdened with quirky poetry. It takes some getting used to. So do the leads’ bizarre accents: Law’s is the most convincing, Wilson’s the most beguiling, and Hayman’s the most obstructively weird (though it is well done).”

“Proving that he’s a law until himself, Jude is much more than a pretty face and hot body – at 38, his latest return to his theatrical roots is another dazzling affirmation of his riveting abilities as an actor.”