Fresh from his Tony Awards success, Mark Rylance brings Johnny back to London for one last time. 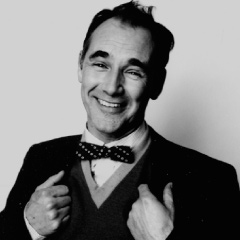 Life must feel pretty good for Mark Rylance.  Over a long and distinguished career he has moved with some grace and lots of eccentric style from accomplished actor, writer, director and artistic director to veritable national treasure.

And his performance as Johnny “Rooster” Byron in Jez Butterworth’s Jerusalem has proved nothing short of a theatrical revelation, with audiences and critics queuing up to praise him on both sides of the Atlantic, and awards ceremonies falling over themselves to hand over their honours (Olivier, Evening Standard and Critics’ Circle awards – and now Tony Awards – included).

And following his Broadway run in Jerusalem, Rylance is bringing the play back to London for one last time.

Most recently Rylance scored a hit with David Hirson’s comedy La Bete in the West End and on Broadway, starring alongside Frasier’s David Hyde Pierce and Joanna Lumley.

Other acting success for Rylance includes Samuel Beckett’s Endgame at the Duchess Theatre and his Tony award-winning role in Boeing-Boeing in the West End and on Broadway. He was Artistic Director of Shakespeare’s Globe Theatre for ten years and his work as an actor included the title roles in Henry V and Hamlet as well as Cleopatra in Antony and Cleopatra and Olivia in Twelfth Night.  Other work includes a number of RSC and the National Theatre productions as well as roles at the Donmar Warehouse and the Royal Court.  In the West End he played Benedict in Much Ado about Nothing directed by Matthew Warchus, for which he won the Olivier Award for Best Actor.  Film and TV work includes The Other Boleyn Girl, Prospero’s Books and The Government Inspector for which he won the BAFTA Best Actor Award for his role as David Kelly.

Ian Rickson, director of Jerusalem, said of Rylance that he is, “steeped in symbolism, imagination and ritual. There are very few actors who are able to be male and also have a poetic dimension.”

Rylance will star in Jerusalem at the Apollo Theatre in London, alongside Mackenzie Crook, from 8 October 2011 to 14 January 2012.

1 thought on “MARK RYLANCE in Jerusalem”