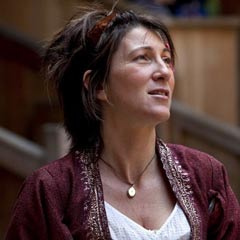 Eve Best in Much Ado About Nothing

Acclaimed director Jeremy Herrin makes his directorial debut at the Globe with Shakespeare’s comedy, Much Ado About Nothing. Olivier award-winning actress Eve Best and Charles Edwards take on Shakespeare’s sparring lovers Beatrice and Benedick, with Joseph Marcell as Leonato.

“Good as they are, both Best and Edwards lapse into the self-indulgence that seems inherent at the Globe”.

“There are flaws… but where it matters most – in the wit, wounded feelings and final happiness of Beatrice and Benedick – this production soars.”

“It’s a witty, warm-hearted and emotionally eloquent account of the play that makes the most of the Globe’s matchless capacity for a buoyant rapport with the audience.”

A Woman of No Importance at the Vaudeville Theatre