A New London Cast For “Mamma Mia!” At The Prince Of Wales Theatre From Monday 13 June

From the West End to global phenomenon, MAMMA MIA!, which has just celebrated its 12th Anniversary in London, is Judy Craymer’s ingenious vision of staging the story-telling magic of ABBA’s timeless songs with an enchanting tale of family and friendship unfolding on a Greek island paradise.

MAMMA MIA! has more productions running simultaneously around the world than any other show (currently 8), it has opened in more cities (280) faster than any other show in theatrical history, 45 million people have seen it, the London production has now been seen by more than 1 in 10 of the UK population, and the show has grossed over $2 billion. Since opening in London in 1999, MAMMA MIA! has been translated into 14 languages and will become the first ever global musical produced in Chinese. The show which opens in Shanghai in July will be a landmark production beginning a new era of musical theatre in China. The Broadway production celebrates its 10th Anniversary in October.

MAMMA MIA! The Movie, the film inspired by the stage show and produced by Judy Craymer, starring Meryl Streep, Pierce Brosnan, Julie Walters, Colin Firth, Stellan Skarsgard, Christine Baranski, Dominic Cooper and Amanda Seyfried, is the highest grossing musical film of all time. The film grossed over £69m at the UK Box Office and one in four homes across the UK has the DVD.

SPECIAL OFFER: Book tickets to Mamma Mia! at the Prince of Wales Theatre in London 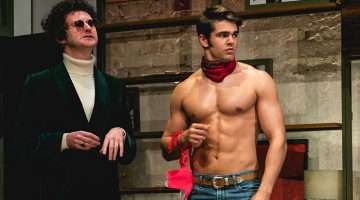 West End transfer for The Boys in the Band