Alfie Boe stars in Les Miserables at the Queen’s Theatre in London. 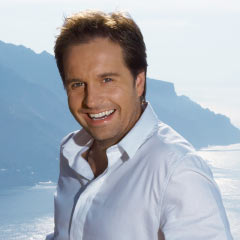 Following his breathtaking performance in the Les Mis 25th anniversary concert at the O2 in 2010, Alfie Boe has signed up to play Jean Valjean in Les Miserables at the Queen’s Theatre in London (until 26 November 2011).

Alfie studied at The Royal College of Music, followed by further studies at the National Opera Studio and the Royal Opera House Young Artist’s Programme. While at the ROH, Alfie was approached by Baz Luhrmann to star in his Broadway production of Puccini’s La Boheme. In 2006 Alfie signed to the label Classic FM Presents and released his debut album. In 2007, Alfie signed to EMI and within less than 3 months his second album, ‘Onward’, was released – recorded with the Royal Liverpool Philharmonic Orchestra. ‘Onward’ went straight to No.1 in the UK classical chart. 2007 saw him touring the UK and Ireland and also performing in a sell out run of Kismet for English National Opera at The Coliseum, London. Alfie was nominated for a Classical Brit Award for ‘Best Album’. Alfie is also proud of his role as Ambassador for HRH’s Arts and Kids Foundation. Also in 2007 Alfie released his second album ‘La Passione’, and toured with the Philharmonia Orchestra. Other Festival appearances include; Llangollen, Chester, North Devon and Kings’ Lynn. Orchestral engagements include concerts with the RPO, Manchester Camerata, BBC National Orchestra of Wales and the RLPO. 2008 credits include; English National Opera production of Lehar’s engrossing opera, The Merry Widow. Alfie also played The Italian Tenor in der Rosenkavalier at ENO, Royal Opera House production of Elektra, conducted by Mark Elder. Alfie was nominated in two categories at the Classical Brit Awards. In 2009 Alfie recorded his fourth album for Linn Records – “Franz Lehar – Love Was A Dream”. Festival appearances in 2009 included San Francisco Symphony, Athens, Dublin, Kenwood, Grassington, Rochester and Lichfield. 2009 Opera performances as Rodolfo in Sir Jonathan Miller’s new production of La Boheme at ENO and just completed, his return to WNO as Alfredo in David McVicar’s production of La Traviata. 2010 Concerts include; The Halle, Northern Sinfonia, CBSO, The Royal Philharmonic, The Welsh Proms, Cheltenham Festival, Ribchester Festival. Operas are The Pearl Fishers and Katya Kabanova for ENO. Alfie won a Tony Award for his performances on Broadway as part of Baz Luhrman’s controversial La Boheme production for which he also won the John McCormack Young Voice award and Lyric Tenor of the World Audience award.

He will join the cast of Les Miserables in London on 23 June alongside comedian Matt Lucas.