Director of the Théâtre du Châtelet in Paris, Jean-Luc Choplin, has probably done more than anyone else to bring Broadway musicals to France, culminating in a major new production of Sondheim's Sweeney Todd.

Director of the Théâtre du Châtelet in Paris, Jean-Luc Choplin, has probably done more than anyone else to bring Broadway musicals to France, culminating in a major new production of Sondheim’s Sweeney Todd.

The Broadway musical is an almost non-existent art form in France, so Jean-Luc Chopin’s decision to stage Sondheim’s A Little Night Music at his Théâtre du Châtelet in Paris in February 2010 proved a watershed moment for musical theatre in the country.

It was, incredibly, the first time Stephen Sondheim had been performed in France, and following its short but successful run he has programmed a succession of musicals at the venue including The Sound of Music, Showboat, West Side Story, Candide and My Fair Lady.

But the big test comes with a major new production of Sweeney Todd, previously unseen in France and featuring a heavy-weight cast including Franco Pomponi and Rod Gilfry alternating in the role of Sweeney Todd, Caroline O’Connor as Mrs Lovett, Rebecca Bottone as Joanna, Nicholas Garrett as Anthony and Jonathan Best as the Judge.

The new production is directed by Lee Blakeley, with orchestration by Jonathan Tunick, musical direction by David Charles Abell, costumes by Tanya McCallin, lighting by Rick Fisher and choreography by Lorena Randi.

Westendtheatre.com’s official photographer Roy Tan caught up with the production in Paris. 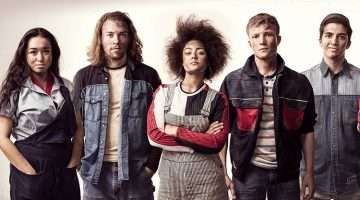