Reviews are in for ABBA Voyage concert at the ABBA Arena in London.

The Swedish super troupers return to the stage with ABBA Voyage, reuniting after 40 years apart. It’s the ultimate comeback story.

Promising a concert like no other and with the help of George Lucas’ Industrial Light and Magic the fab four delivered with their futuristic new show ABBA Voyage – mixing new and old songs into a groundbreaking concert.

Blurring the lines between the physical and digital, life like avatars of Agnetha, Anni-Frid, Björn and Benny clad in Dolce & Gabbana-designed costumes belt out much loved songs supported by a 10 piece live backing band, put together with help from Klaxons’ James Righton and featuring Little Boots (aka Victoria Hesketh).

In a touching moment last night, Agnetha, Anni-Frid, Björn and Benny appeared live on stage at the curtain call to the roar of the approving crowd.

In terms of the ABBA Arena, it is a brand spanking new 3,000 person ‘flat pack’ arena that has permission to stay in Queen Elizabeth Park for the next five years. The venue brings film and lighting together in a state-of-the-art digital immersive venue.

So is it worth it? In short YES. Who could resist ABBA’s classic pop songs played at full pelt with a fabulous backing band combined with life like avatars of the band in their hey-day. It’s an amazing, unique experience that is bound to be copied by other performers.

Book tickets to the ABBA Voyage concert at ABBA Arena

"Any trepidations about ABBAtars and thoughts of dodgy Sinatra holograms are banished as soon as the show starts. In the most high-tech theatrical space I have ever been in, ABBA put on the kind of show that concert producers can only dream of."

"The show works best when ABBA are there, performing in front of your eyes on the stage. The large side screens add hugely to the experience, but when the show tips into music videos and animation, a sense of it being a live experience is lost. They need to keep faith with the extraordinary accomplishment of Industrial Light & Magic, and just go for it!"

"An evening, and experience, like nothing else on Earth. Go see!"

"The effect is genuinely jaw-dropping. Watching the four figures on the stage, it’s almost impossible to tell you’re not watching human beings: occasionally, there’s a hint of video game uncanny valley about the projections on the giant screens either side of the stage, but your attention is continually drawn to the human-sized avatars."

"Voyage is the kind of triumph that’s destined not merely to run and run but be repeatedly copied."

"Captivating.. Out of this world"

"This was captivating, and celebratory in a rather innocent fashion. Who doesn’t love dancing along to Gimme Gimme Gimme?"

"A show like this lives by the spirit with which it was conceived, and unlike past hologram shows there was nothing ghoulish about watching youthful versions of people still very much alive."

"For a show that combined live music, 3-D spectacle and something else entirely, it was out of this world."

Will Hodgkinson, The Times
Read the review ➔
More The Times reviews
The Telegraph
★★★★

"In a blockbuster multimedia CGI spectacular, the Swedish supergroup opened a residency at the purpose-built Abba arena in London's Olympic Park with an entertainment extravaganza that had fans dancing in the aisles and giving a standing ovation to musicians who weren't even onstage."

"Abba's Voyage is fantastic, and I highly recommend it. But it still makes me nervous. One day, if we're not careful, all gigs will be like this."

"It was if they were in the room"

"Crucially, you couldn’t differentiate between the (real) 10-piece band playing by the side of the stage and the group themselves as they went through their paces with hits such as SOS, Knowing Me, Knowing You and Gimme, Gimme Gimme."

"They had their mannerisms down to a a tee. From Agnetha sultrily flicking her hair, to Benny’s goofiness."

"A spectacular vision of pop’s future"

"This is art built for the fans: it’s about standing side-by-side in a euphoric sense of togetherness, singing the same lyrics as thousands of other people while letting your senses go. This concept will probably go international and it’s only the beginning for what the technology means for the stars of today. Fine, it will never replace real people. But it is still memorable, dazzling, and breath-taking entertainment."

"I literally could not believe my eyes"

"Light years ahead of any of that hologram nonsense, this show really does look like the future of music"

"If only it were acceptable to begin reviews with the brain exploding emoji."

"It was when the group were life-size that they convinced completely."

"For all the razzamatazz, the show will stand or fall on one thing. Will the Abbatars be up to it? Or will they be just too weird and ghostly, like the hologram of Roy Orbison that shimmered round the arenas in 2018? The answer is that they are as good as they can possibly be. They’re about 80 per cent realistic, 20 per cent Madame Tussauds."

"After a slow start, the evening turns into a cascade of classics. There’s pinpoint pop in S.O.S., bittersweet drama in Knowing Me, Knowing You, delicious disco in Gimme! Gimme! Gimme! (A Man After Midnight), mellow warmth in I Still Have Faith In You, beautiful sadness in The Winner Takes It All, and all of this rolled into one in Dancing Queen."

"No Ordinary Abba Night at the Club"

"With a concert spectacle mixing wizardry and technical skill, the band makes a case for its continued relevance."

"It’s a mix of wizardry and technical skill that, decades later, after movies and musicals and greatest hits compilations, is still at the pinnacle of pop maximalism. To hear the closing piano riffs on “Chiquitita” in a crowded arena is an exalting experience, and despite its eyebrow-raising premise, Abba Voyage miraculously takes flight."

"Stepping back in time and into the future, Abba astound with a mind-bending virtual comeback show of hits, uncanny dance moves and no-expense-spared Swedish class"

"... the most enduring pleasure of the whole endeavour is exactly how uncheesy Voyage is; how it is not a Madame Tussauds with go-faster stripes. A kind of Scandinavian classiness is built into everything from the building’s exterior pine construction on up to the tunes themselves, in which stoicism and good sense barely hide the unbridled misery of a series of leave-takings."

"Abba-cadabra! With a touch of magic, they're back on stage... ADRIAN THRILLS watches classic band's 'live return' on first night of London's hottest new show"

"For those lucky enough to witness last night’s opening show of Abba’s virtual London residency, there was only one conclusion: Mamma Mia! How can we resist you?"

"In a purpose-built, 3,000-capacity venue, the show began amid cries of ‘unbelievable’ and ‘Oh my God!’ at just how realistic the avatars – beamed on stage as holographic images – actually were."

"A digital avatar will never be able to live in the moment that way, although Abba Voyage made an emotional connection in other ways. Most of us can measure our lives in Abba hits, and the sheer strength of the material alone should be enough to guarantee this show’s box office success." 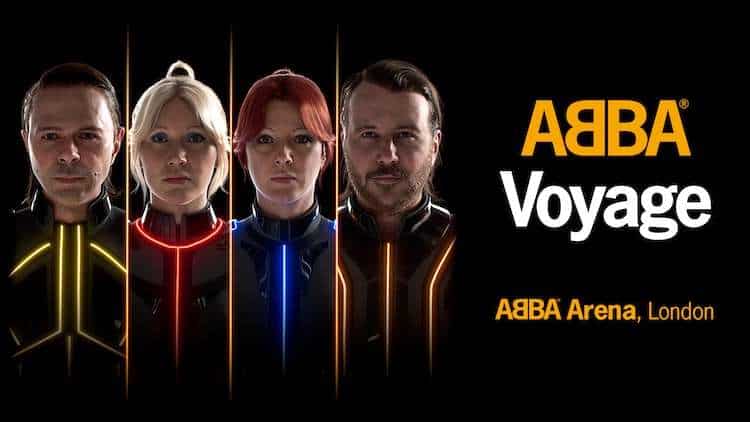 ">
ABBA Voyage opens this month in London at ABBA Arena
">
Mamma Mia! The Party tickets at the O2, London
">
ABBA Arena – what we know so far: more videos and images released

Where is Mamma Mia! playing in London?

Sequel to Mamma Mia! is underway

Bernadette Peters and ABBA to appear at Olivier Awards 2014

Mamma Mia! Hits Its 5000th Performance In London
">
Mamma Mia! tickets at the Prince of Wales Theatre (transfers to the Novello Theatre from 6 September 2012)