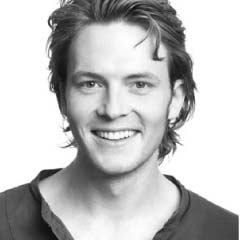 Welsh actor David Thaxton won a Best Actor in a Musical Olivier Award in 2011 for his standout performance as Giorgio in Passion at the Donmar Warehouse.

And now he has followed Joseph Millson into the role of Raoul in Andrew Lloyd Webber’s Love Never Dies at the Adelphi Theatre – the composer’s follow-up to The Phantom of the Opera.

David trained at the Royal Welsh College of Music and Drama. Performances in the West End include playing Enjolras in Les Misérables at the Queen’s Theatre. He has also sang at the opening gala for the Wales Millennium Centre, and played roles in Trial by Jury, The Tailor’s Daughter, The Rake’s Progress, Sweeney Todd, The Cunning Little Vixen and Warchild.

He joins the cast of Love Never Dies alongside Ramin Karimloo as the Phantom, Celia Graham as Christine and Haley Flaherty as Meg.

SPECIAL OFFER: Save on tickets to Love Never Dies at the Adelphi Theatre in London