Oliver Thornton camps it up in Priscilla 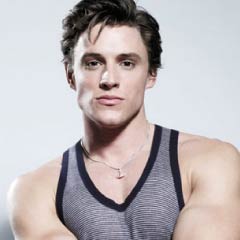 Some are born great, some achieve greatness and some have all that AND are very hot indeed. Oliver Thornton is the multi-talented actor currently playing Adam/Felicia in Priscilla Queen of the Desert at the Palace Theatre in London, originally played in the Oscar-winning movie by Guy Pearce.

Born and raised in South Wales, Oliver trained at Mountview and has spent his career so far appearing in a range of big, blockbuster musicals. Roles include Mark in Rent at the Duke of York’s, Raoul in The Phantom of the Opera at Her Majesty’s, Enjolras in Les Misérables at the Palace and Queen’s theatres, Harrison in Chicago at the Adelphi and Rusty in Starlight Express on the UK tour and in its home in Bochum, Germany.

Film roles include De-Lovely and his much praised performance as Adam has earned him Whatsonstage and Broadway.com theatregoers choice awards.

The big question on all of our lips is, what’s up next after Priscilla… Priscilla on Broadway?

Oliver stars in Priscilla Queen of the Desert alongside Richard Grieve as Tick, Mark Moraghan as Bob and Don Gallagher as Bernadette.

1 thought on “OLIVER THORNTON in Priscilla Queen of the Desert”