The Wizard of Oz – Reviews Round-up 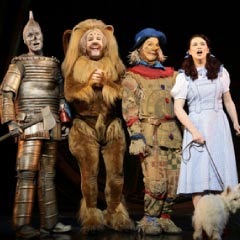 Finally it’s here! The build-up to Andrew Lloyd Webber’s new production of The Wizard of Oz has been nothing but intense, from the BBC talent show Over The Rainbow to find a new Dorothy to star in the musical, to the return of Michael Crawford to the stage, to Andrew Lloyd Webber and Tim Rice reuniting at last to provide four new musical numbers.

And the reaction from the critics is good, which must come as a relief to Lord Lloyd Webber, who has had a rough 12 months with a series of headaches over the launch of his new Phantom sequel Love Never Dies, his failed attempt to sell some of his theatres, and his personal battle with cancer. He deserved to have a hit, and with Love Never Dies taking 7 Olivier Award nominations last month, and a positive reaction from the critics about The Wizard of Oz, things are looking up!

Danielle Hope, who makes her West End stage debut as Dorothy, gives it her all and impresses the critics with a fine performance. And the new songs go down well, adding to the original score of the stage show and movie. But the real critical superlatives are reserved for Robert Jones and his lavish costumes and set, and Hannah Waddingham, who wows the critics with her performance as the Wicked Witch of the West.

See review round-ups below from the Guardian, Times, Telegraph, Evening Standard and Independent.

The Wizard of Oz – News and features