The Snowman is the magical stage production by Birmingham Repertory Theatre, based on the classic book by Raymond Briggs and the film directed by Dianne Jackson and produced by John Coates.

Featuring Howard Blake’s classic song Walking In The Air, this enchanting live show has thrilled audiences around the world with its enchanting costumes, stage flying, and snow effects!

In the story, a young boy’s snowman comes to life on Christmas Eve and they set off on a night-time quest for adventure, meeting Father Christmas, dancing penguins, reindeer and crowds of The Snowman’s friends. But can they escape evil Jack Frost and get back home for Christmas morning?

Book tickets to The Snowman at the Peacock Theatre in London

"Sentimental without being slushy, The Snowman is one of the most enduring festive shows in town."

"Set in a fantasy suburban era it is almost operatic in its musical strategy, with Howard Blake's score travelling far beyond the usual musical perimeter of children-orientated shows."

"The seamless scenery is stunning and the costumes - on the numerous furry animals as well as the fluffy snowmen - really bring this production to life."

"A new Christmas tradition is being established. The Peacock Theatre is now filled with children whose parents were themselves children when Raymond Briggs's book The Snowman, and then the film version, came out."

"The evening ends with dancing curtain calls. As the Snowmen and animals scamper back for applause, snow falls on the entranced audience."

"The Snowman is a wonderful alternative to the usual Christmas entertainment for children of either clichéd pantomimes or The Nutcracker ballet, which can go over the heads of many children."

"This production of The Snowman, a joint production by Sadler's Wells and the Birmingham Repertory Theatre, is a joyful festive treat that is entertaining for both children and adults alike."

Read the full review
Time Out
★★★

"A gorgeous festive ballet for families, based on Raymond Briggs' story"

"the love and precision with which the Birmingham Repertory Theatre's production is put together reinforces its deserved status as a classic, and at the point when the boy and the snowman take off to fly above the stage everyone (with, it must be confessed, the exception of my two-year-old son, who was busy pretending to receive an executive call on his fibre-optic torch) is enchanted." 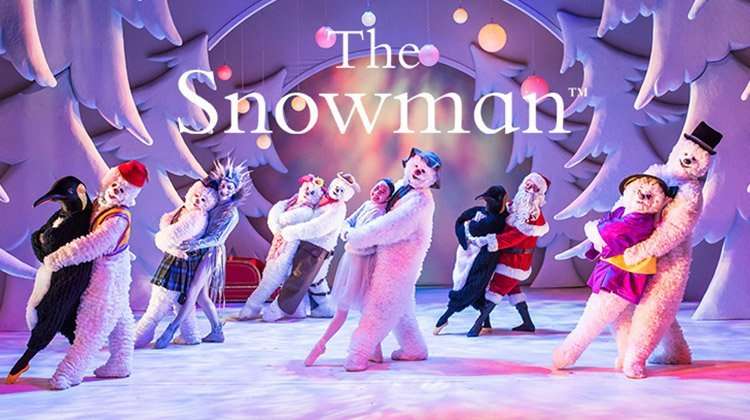