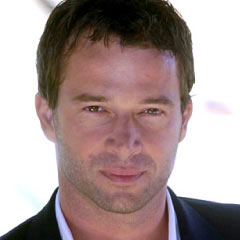 Hot on the heels of HBO’s racy and award-winning sex and sandals drama Rome, James Purefoy is back in Britain – and back on stage – in a revival of Terence Rattigan’s 1942 play Flare Path.

James Purefoy is best known for TV roles including Marc Antony in HBO’s Rome, NBC’s The Philanthropist, and movie roles in films such as Resident Evil, Vanity Fair, the Black Prince in A Knight’s Tale and Solomon Kane.

His theatre credits include a stint at the RSC in Macbeth, The Tempest, The Man Who Came to Dinner and King Lear, Hamlet for the Bristol Old Vic, Present Laughter at the Globe Theatre, Les Enfants du Paradis at the Barbican, and Trevor Nunn’s National Theatre production of The Relapse.

Up next for the actor is a starring role in new ITV drama Injustice, and movies Ironclad and John Carter of Mars.